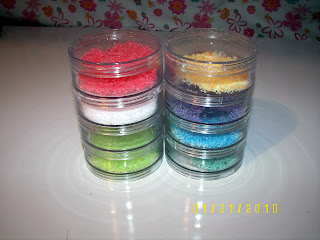 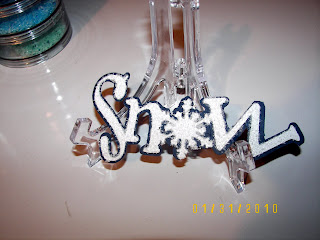 Ok....so I couldn't stand it. I had never heard of flower soft until about a month ago. On one of the groups I belong to, they started talking about flower soft and how great it was. At first I wasn't interested because I mostly scrapbook and I didn't want it flaking off all over my albums plus it was like $6 a jar for 1 color. Well, then this group of enabling women started talking about how they made their own out of dollar store styrofoam balls. That caught my interest so next time I went to town you know I had to stop at the dollar store for some styrofoam balls. When I got home I rubbed them together over a paper plate, took an ink pad and rubbed it onto the plate with a tich of water, mixed them together and voila....homemade flower soft. Then I asked myself, "What in the heck are you going to do with that?" Well, since I made it (I even got my kids involved rubbing the styrofoam balls together) I had to make something with it. Well, it's snowing right now and wouldn't that make "cool" snow. YES it DID! LOL. Wanna see? Look close at the snow title and you can see the flower soft on it. My hubby even said it looked cool and that's saying something! LOL. So I have now added homemade flower soft to my arsenal of scrap stuff. Which I might add is piling up and my dear hubby had to add a couple more shelves to my scraproom to accomodate all my treasures! Thanks dear! I LOVE it! 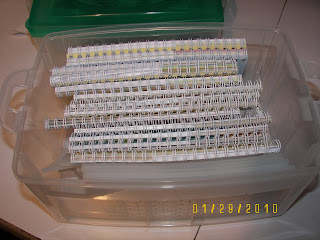 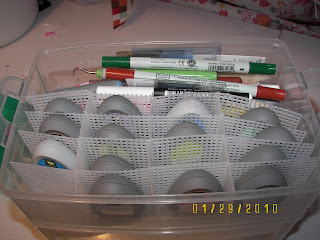 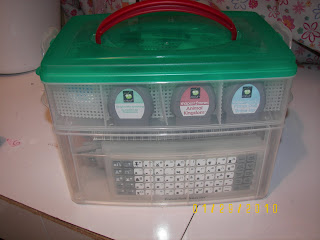 Someone asked how I transported my cartridges when I took them places. For starters, I don't use my cartridges much unless I'm hanging out at the cabin (no computer there). I have really been spoiled as I find using them tedious now. I like my computer software and for my birthday, my sweet hubby bought me a laptop for scrapping and family history so I can now take it with me on those trips. Anyway, here is how I store and travel with the cartridges I do have. I haven't bought a new cartridge in over a year and I don't forsee buying any in the future either. But, I do use the ones I have occasionally. I really like how I can keep the cartridges and the overlays and books together for easy use. This is actually a christmas ribbon container that I got for $7 or $8 dollars. A perfect fit for the cartridges and books and for those with more cartridges, you can buy more of these and "snap" them together. Anyway, just FYI!
Posted by Heidi at 10:58 PM No comments: 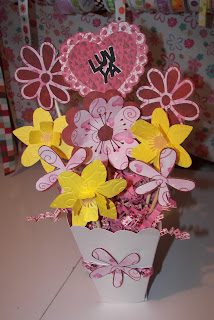 I made this for my 92 year old Grandmother for Valentine's Day. I think it turned out great! It's hard to know what to get someone who is that age....they don't want or need anything so I hope she'll like this. Anyway, I've created a lot lately and it feels great to actually USE some of the files I've been collecting. Some of them are amazing and I need to spend more time using them instead of collecting them now! LOL. 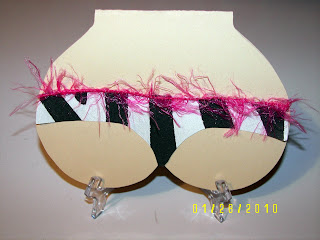 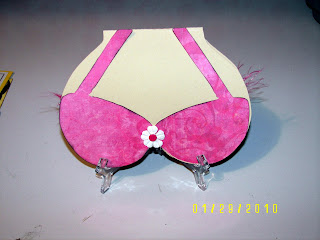 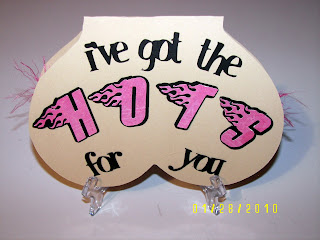 I saw this cute card on a blog a while ago and had to laugh. I thought it would make a great Valentine's Day card for my hubby. I usually give him a sentimental card, but this year I couldn't resist. I'm sure it will make him laugh. He has a great sense of humor which is one of the many reason I love him. On one side is the panty, the other the bra and then here's what I did on the inside. I really like how the flames cut on the hots. When I went searching for a font with flames, I was surprised at how many of them there were. I LOVE SCAL for allowing me to use any font I want. They just don't have anything like this on a cartridge and it just adds that little oomph to the card. I think it turned out cute! LOL.... 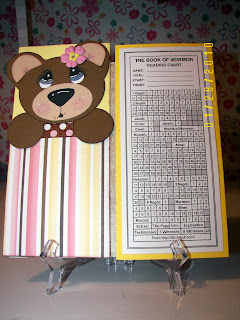 This was such a fun project to make. I had my activity day girls over today to create this Book of Mormon Scripture Bookmark. On one side, it has a chart to mark off each chapter in the Book of Mormon after they complete it and on the other side is this cute little bear. Hopefully they will use this bookmark and keep track of their scripture reading too! I'm so loving all these cute little ways to use these bears. This is the bear head that I did when I first got Scal, however, now I've decided I like the tear drop eyes instead of the oval ones and just circles for his paws instead of the little finger things I had on him originally. Anyway, just one more way to use these cute little bears. 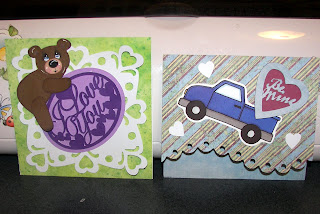 I decided to make my kids Valentine's Day Cards this year. This is what I came up with. I hope they like them! I got the "I Love You" oval from here: http://mamawslegacy.com/cut/c12/c12.html

Jump on over to her site for some of the most wonderful SVG files I have found. Truly a very generous and talented lady. Make sure to leave her a comment if you download any of her files. I'm sure she would appreciate it!

I cut the bears using SCAL2. In a post below is the link for that file. I cut the scalloped card that I got from Wanda's blog. She also has some wonderful files and is a generous and creative lady. That file can be found here: http://wandascrafts.blogspot.com/

And last but not least, I downloaded the heart frame from here:
http://svgshop.com/blog/?p=1042

It was a fun few minutes of creative time! Love to accomplish something! LOL. I decided to also enter this card in the BBTB2 challenge also. Thanks for looking! 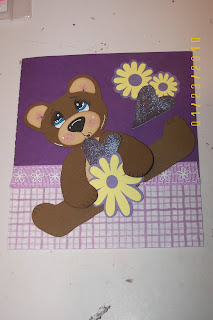 Tonight I was browsing some sites just seeing some fun projects when I went to BBTB board and was saddened that it was not going to be around any longer. It's been one of my favorites forever and I have loved seeing the projects they come up with to help me use my cartridges to there full potential. However, they have started up a BBTB2 board and so I jumped over and was pleasantly surprised to see that it's going to be the same type of thing. I was excited to see that they had a challenge posted and since I wasn't doing anything, I thought I'd give it a shot. The challenge was to do a Valentine's project using any cut from any cartridge and using the color purple on it. This is what I came up with. A cute Valentine's Card with this little bear on it. I cut the bear and flowers using SCAL2 and the 2 hearts from my good old George cartridge. I then added some stickles to the hearts to give them a little bling and voila. One purple Valentine's Card for the challenge. I think it turned out cute! Wish my picture was a little better but....I think I need a stand instead of always trying to take these pictures with them lying on the table. Anyway....here's my entry! The prize is some vinyl which I would LOVE to have. I have some outdoor vinyl, but no indoor vinyl and I'd like to do some sayings on my walls so here's to hoping! At least if I enter I have a shot, whereas if I don't, then I won't.....here's to crossing my fingers and toes! 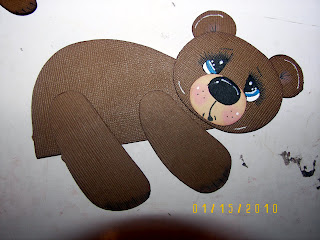 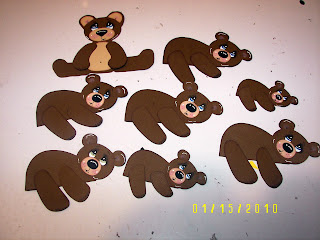 Wanna see what I've been up to lately? Aren't these little guys cute! I got the pattern from here:
http://www.treasureboxdesigns.com/category_16/FREEBIE-Treasure-Box-Tuesdays.htm

I did add the brown muzzle piece though just for some contrast. I think they turned out really cute! The one on the top that is not laying down is another pattern that I did a while back. It was one of my first SCAL/Inkscape creations and I like it too. I created them in different positions and had fun with the parts and pieces. I even made one shooting a basketball that I used on my son's basketball pictures last year. After having done several of these, I finally figured out how to do the faces so that they turn out cute. I guess trial and error pay off because I think these guys are cute! I'm going to make some with just the heads and hands to go on pictures too. I think they will look great on my pages. I'm so excited.... TFL! Anyway, go download your free pattern and create some cute bears! 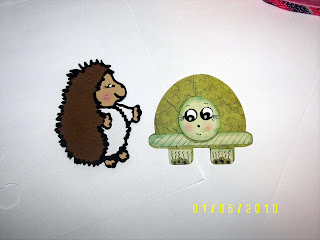 Today I decided to play in both MTC and SCAL2 to see which one would be easier to convert a font to. Do you remember that cute little font that I made my monkeys out of? Well, here are two more images out of that font. I must admit that both MTC and SCAL2 did the hedgehog just fine...isn't it cute! LOL. But MTC won hands down with the turtle. His original shell had a really elaborate design and so I wanted just the outline of the shell. I never could get SCAL2 to outline it...blackout wouldn't work, shadow wouldn't work. Really it was a mess. This is the tutle image cut from SCAL2 and even though he is cute, I wanted to be able to do his shell seperately. In MTC with a little work, I actually was able to create the look I was after. So....chalk one up to MTC. I'm really leaning towards purchasing this software. I just like the clean look of it and the ease of the features. The money is what is holding me back....I just upgraded to SCAL2 and told myself that it will do what I need it to do so I've been forcing myself to watch videos on SCAL2 to learn more about it. I have learned some fun things and found that it has a vertical text feature which I didn't know existed.....that's kinda fun!

Want that font? Go check out her blog as she has lots of fun stuff including several fonts....