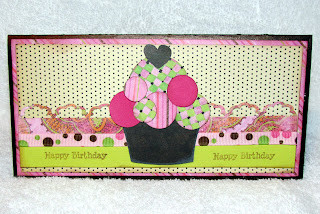 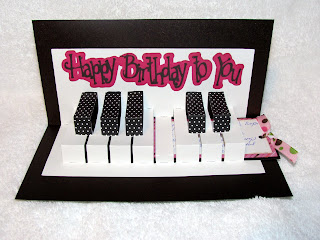 My friend is having a birthday soon and she is a wonderful piano player so I wanted to make this card for her.  I made this card once before for my daughter's piano teacher and loved the inside but wasn't wild with the outside of the card.  I was in a hurry and just didn't embellish it right so it looked only "half" done.   Then when I added my sentiment to the inside of the card, I felt it detracted from the piano look of the card and I didn't like that either so that card was a flop!  LOL.  Do you ever have those?  If you want to see my first attempt, go here.  Well, it's such an amazing file that I decided to try my hand at it again and this time I LOVE it.  I love to learn from my past mistakes and to improve on them.  I got my inspiration for the front of the card from here.  The piano card base came from Jennie Bean Crafts but I couldn't find a link for this file on her site anymore but she was making amazing files long before most other designers I have found.  Anyway, I love the polka-dotted paper on the black keys and the front of the card is much nicer this time.  I like how this one turned out!  To fix the note problem on the inside of the card, this time I tucked a tag under the keys and it is much nicer.   I hope my friend likes it!

At the Lake Layout 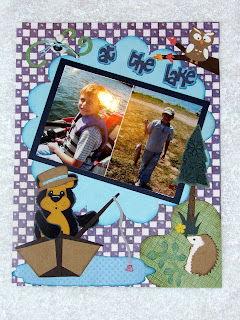 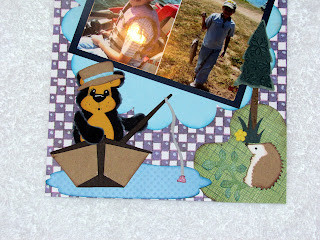 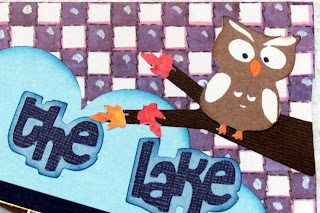 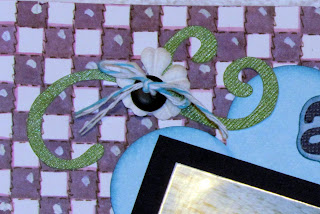 Today I had a few minutes to scrap so I decided to join a couple of challenges....I love to be motivated by challanges AND get something done for my books.  :-)  Win Win!   LOL.  One of the challenges was a facebook one and one was to use an owl, another to use something in my stash...see that background paper... I bet I've had it for over 6 years.... yep!  I'm a scrapbook hoarder!  Actually, I've been trying to use up my stash instead of buying anything new unless it's on a really good sale!  LOL.  I'm not doing too bad with that but..... 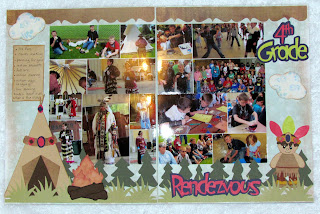 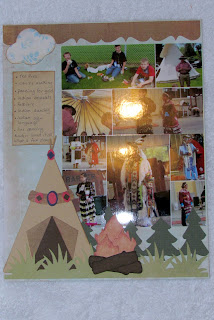 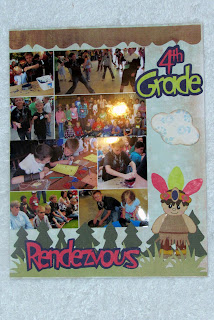 I LOVE these kinds of projects!  A couple of years ago, my daughter was Pocahontas in school.  I created the indian and tee pee at that time for her pages, but had too many.  The grass cutouts were left over from a different scrapbook page, the fire was leftover from a camping layout.  The rest of the cuts were cut for this project from scrap pieces of paper that I keep in a sorted system and voila....one quick layout.  Love those kinds.  When I have extra cuts like the indian and the tee pee, I keep them in a page protector with any matching leftover paper pieces and that's how I got the title and feathers to match.  So bascially with the exception of the background paper, this whole 2 page layout is leftovers from something else.  Yeah!  :-) 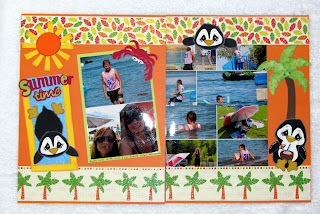 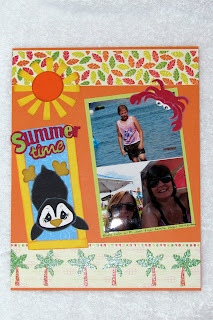 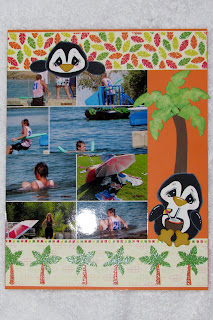 My family is all gone tonight....not sure how that happened but..... so I decided to play.  I love these little penguins.  They are so cute!
Summertime title is from SVGCuts
Crab is Little Scraps of Heaven Designs
Palm leaves a google image search and convert
Sun-Scrapping Bug Designs
But the fun part of this layout is that these penguins, the little coconut drink being held by one of the penguins, and the paper borders are all left overs.  I love to be able to take left overs paper and items and reinvent them into a whole new look.  I loved the sparkle on these papers and so I couldn't throw away my extras.  I still scrap 8.5x11 so I have lots of scraps. Tee hee.  Anyway, I created these penguins over a year ago to go on some winter pages that I had done and they were just sitting around.  Way to cute to throw away, but I wasn't quite sure what to do with them until now.  Don't they look like they were meant to be on these pages.  LOL.  The little coconut drink was an extra from a summer layout I did a little while ago too.  So I "reused" it also.  Perfect! 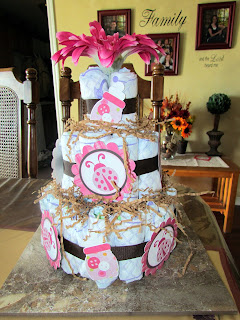 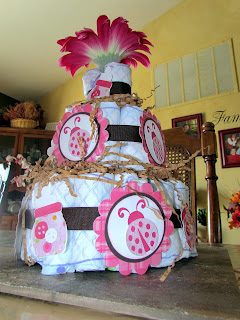 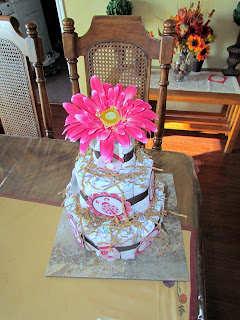 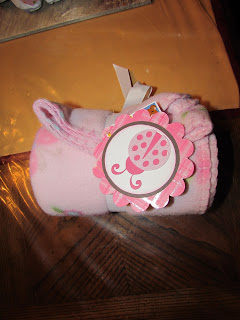 My niece is expecting her first baby and her Mom bought her a blanket that is done in brown, hot pink, light pink and white with ladybugs on it.  So I copied the "theme" of her blanket and make this diaper cake to go along with it.  I then made a card that matched the cake to go on the blanket that I'm also giving her.  I actually bought the blanket to put inside the cake but it was too tall and I didn't want to unroll it and then roll it again the right size since I had enough diapers for the cake without it so I'm just giving it to her as part of the gift.  I hope she likes it!  My family thought it was cute! 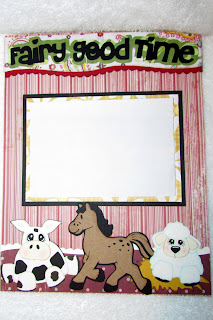 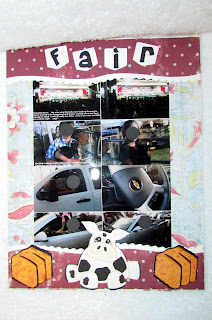 I did these layouts to go with my Fun at the Fair layout!  We had such a good time.  I had forgotten my camera, so all of these pictures for these layouts were done with my camera phone.  Who knew that I would be so thankful for such silly simple pictures.  I love preserving all of our good memories.   Here's to camera phones which provide better than nothing pictures!  LOL. 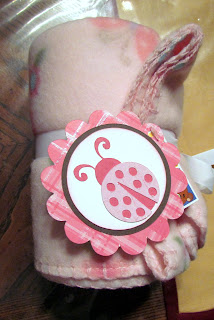 I found this challenge where the prize is some of Scrappy Moms stamps.  I haven't tried any of her stamps yet and they are so cute that I decided to join her challenge and made this cute little ladybug shaped card to go on my baby gift for a shower I am going to next week.  I think it's cute!  I made it to match the diaper cake that I will be posting another time.  Isn't this ladybug sweet!  The colors for the shower and nursery are hot pink, light pink, brown and white so voila!  One cute shaped card for my gift and one completed entry for the challenge.  Double duty....love that!  Now if I was only lucky enough to win to try some of her stamps it would be ever better!  LOL.

If you want to play along with the challenge go here:  http://www.scrappymoms-stamps.blogspot.com/2012/09/terrific-tuesday-challenge-shape-up.html

U Are Bee-utiful Layout 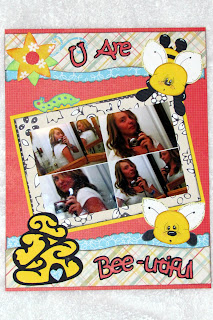 My daughter took these pictures of herself in the mirror one day after she had curled her hair.  She is growing up so fast and is so beautiful, I "snuck" them and had them developed.  She hates it when I steal pictures of her that she's taken to scrapbook, but I just couldn't help myself.  No longer do I have a cute little baby, sassy toddler, or even little girl.  Now I have a young woman and I love her more now that I ever thought possible.  They grow so fast.  Love you sweet girl and to me you will always be my baby! 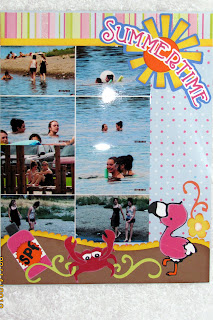 Here is another cute layout that I did with a lot of different files.  The bird, crab, and bottom border are Little Scraps of Heaven Designs, the turtle is and SVGCuts, and the Got Sun Block is a Scrapping Bug Designs file.  I like to mix and match my files...especially it I don't have a whole set.  All of these files listed are freebies that they gave away once upon a time.  I think they all look cute together even if they are all from different companies.  These ladies all create fabulous files and it was fun using them.  :-) 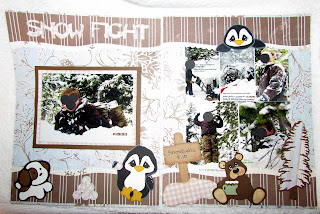 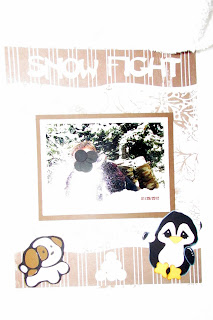 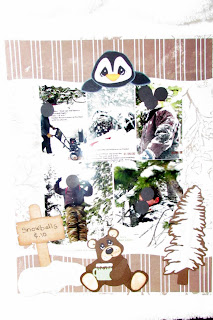 My husband was out snowblowing and my son says, "Dad, can we have a snow fight?"  His Dad says, "I'll win."  My son, laughing, takes a huge shovel of snow and throws it at his Dad.  His Dad stops, turns the snowblower his direction and keeps moving snow.  My son was covered from head to toe!  It was hilarious and my son was laughing so hard.  Somehow, my son still thinks he won that round?????  I was so glad I was out there to get pictures of my son who loves the snow anyway, when this little exchange happened.  It was fun to see this whole thing play out and to have pictures before, during and after!  Such fun. 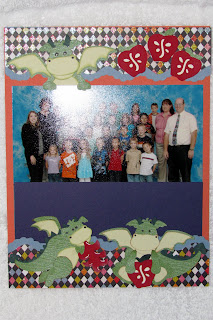 These little dragons are from Designs on Cloud 9 and my son loved them so I thought I would put them on a layout for him.  Please ignore the dark blue paper on the bottom.  It's to cover the names of the kids in the class for safety reasons.  LOL.  It's not part of the "official" layout!