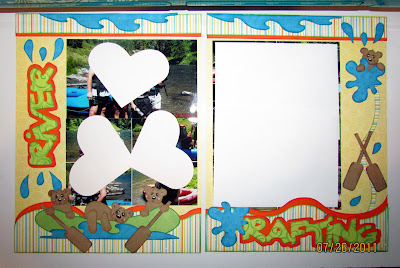 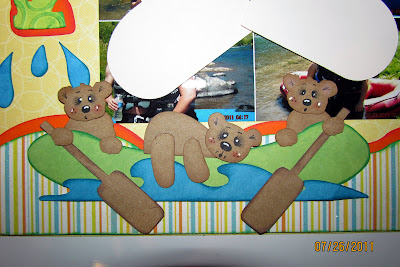 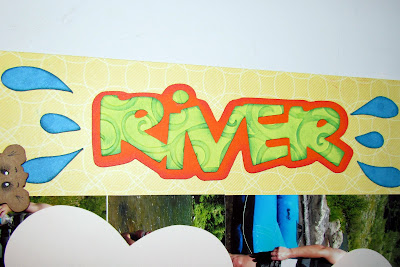 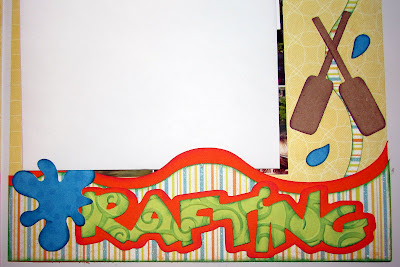 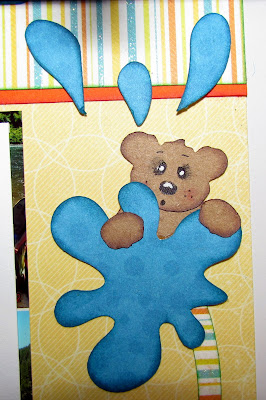 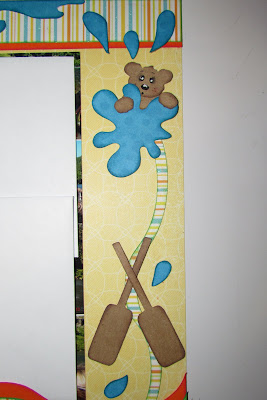 This layout was so fun! I used my DCWV Citrus Stack again. I'm loving this paper for summer photos! It's perfect. I then used my Beary Cute Files from TreasureBoxDesigns.com and made my own raft, oars, and other embellishments. I love my little rafting bears. I think it turned out so fun. This trip was a blast except for the very beginning. We had to carry these two big rubber rafts straight down a rocky mountain side for quite a distance. I wore brand new water shoes and by the time we got to the bottom to put the boats in the water, my shoes had big holes in both heels and both toes. Needless to say when we were done they went in the trash. The boat ride itself was so much fun. My daughter who doesn't like water started off a little rocky, but by the end of the trip, she didn't want to get out. We had so much fun. We got in a water fight with the other raft and some people in kayaks came around us and said, "We come in peace." It made us all laugh. It was a really fun day and a great way to end a working weekend.
http://kcclayoutchallenges.blogspot.com/2011/07/challenge-48-its-all-about-title.html 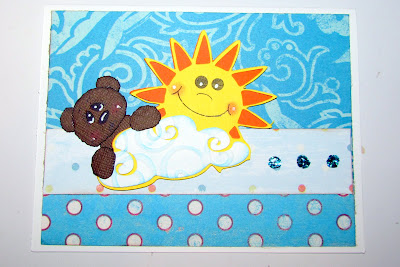 This week I found a bunch of challenges that I wanted to play along with. I was lucky that I was able to join a ton of them all into one card which is great because my Mom called and wanted to run away for the weekend. So Friday night at 6:30 we decide to go and so the packing began. LOL. One of the challenges wanted us to use 2 or more of our favorite paper lines. I love My Mind's Eye and Bazzil and use them for a ton of things so this card had both. Another challenge wanted me to use a bear, one wanted a sun, one wanted a cloud, one wanted bling, one wanted embossing, and one wanted me to use one of her images (for the image - go here to The Scrapoholic. I added a bear to her image) and there you go....all wrapped up in one little card. Gotta love that! I love these little image. I was even able to use my Treasure Box Designs stamps which I love, but are WAY to big for 90% of my projects. Dart it because I love them but rarely make anything big enough to use them on and there is no plan to make them smaller. I'm hoping that someone makes smaller stamps besides Peachy Keens. I love those too and enjoy using them but really wanted the TBD ones smaller. Darn it! LOL. Anyway, here are the challenges I entering this into.... 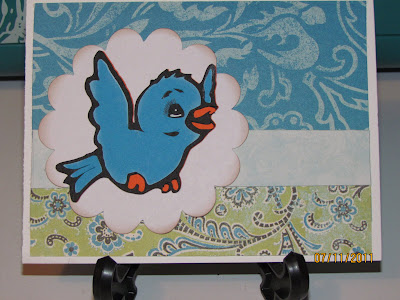 Isn't this the cutest bird ever! I made a bunch of these and put them in my Valentines Day sucker bouquets for my Grandmas. Well, I had this one left and decided to turn it into a birthday card for my Grandma for the challenge below. Her birthday is next month. I think she'll love him. I know I do....

Wow....I just found this site that is giving away 20 cricuts in 20 days. I so want one! So I thought I'd share with the possibility of winning one. If you'd like to check it out, go here:

http://mycraftchannelblog.blogspot.com/2011/07/new-show-featuring-kristine-mckay-mcc.html
Posted by Heidi at 10:42 PM No comments: 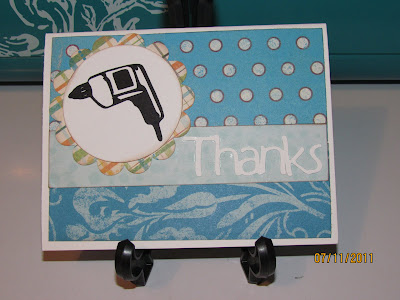 This last weekend, we had one of our best friends and his son come up to our cabin and help get it ready to put the new siding on. It's been a big job for just my hubby and me and there help was greatly appreciated. So I made them this thank you card with a little drill on it to say thanks for all their hard work. It was really appreciated! More than I'm sure they even know. Thanks guys! 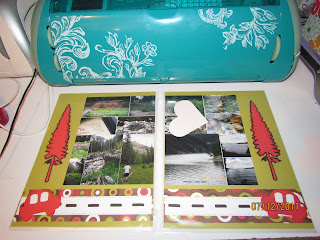 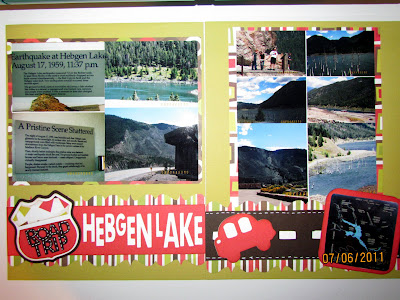 Jenn shared this cute little sign shape svg file. I liked it so much I decided to use it. Thanks Jenn. I took the shape and shadowed it twice and then took the shape and placed a thin rectangle in the middle and did a boolean join to give me the two pieces to cut in different colors. I love how it turned out. I had saved a layout where someone had this little shape and put road trip on the bottom and thought it would look cute on these pages. I also love the little road and the car. Simple, but effective as I had 6 pages of this trip to do. I love it when I complete a project. Especially, when it's last years vacation....yes I am still running behind. LOL. 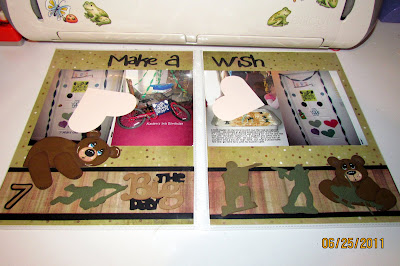 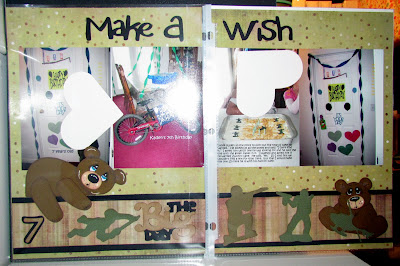 Ok....have you ever had a ton of pictures laying around that you just never got to? Well, I've had these birthday pictures of my son for a long time....he's had two more birthdays since these were taken and I've never scrapbooked them. Why you ask...well it was because we had a family birthday party, a friend birthday party, plus the normal pictures that I take of a birthday and so I had a TON of them. When I start a project, I like to finish it and I knew that these pictures were going to take me quite some time. So..... I finally got around to getting them done. They are fairly simple, but hey, at least they are done! We had an army party for my son and I found this cute little font online that was of all these army people...perfect as they were the exact same plastic army men that I bought for his cake and also for various games at this party. His invites were fun and said, "I don't know what you've been told, but Kaden (blank) is (blank) years old. Please wear camo to his party as we are going to be in the army." The boys had fun and we played lots of different games and even had "dirt" pudding for dessert. The boys loved the "worms" in the dessert and had a great time. All in all, when I got them done, it was 15 pages. Yikes! LOL. But they turned out really cute and the pictures were such a fun reminder of what a good time they had. Boy am I thankful for the feature of putting text on my actual pictures so that I could remember all the fun details. If I was trying to do it from memory now, all the cute stories would have been lost. So I'm really glad that I usually take the time to put text right on my pictures before I develop them so that I don't loose those stories. As it is, I forgot the dog tags and the invites that I had at home so they aren't on these pages but the pages are DONE and that's all that counts. Love my little army people and my MTC that makes it possible to find the absolute perfect image for any page. Did you notice my bear is holding a cute little army helicopter. Adorable! Love it and love that they are finally done and out of my to do list! 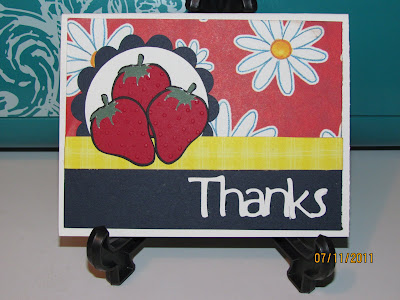 This weekend, I had so much fun. I decided to take that huge stack of scraps and make some cards. This one turned out so summery. LOL. I had these little strawberries left over from another project and couldn't resist using them on this card. I'm going to enter it into these challenges: