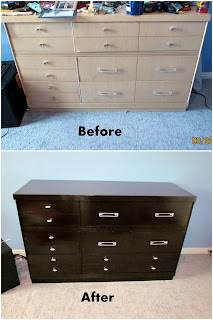 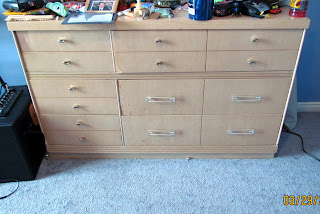 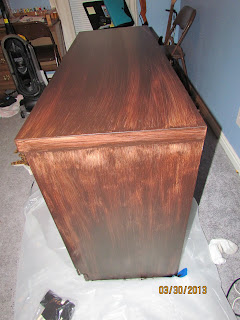 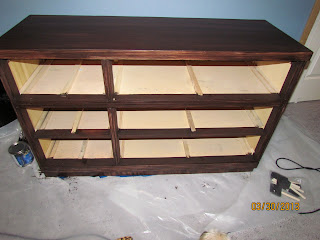 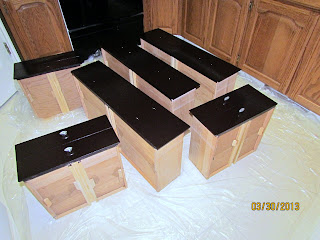 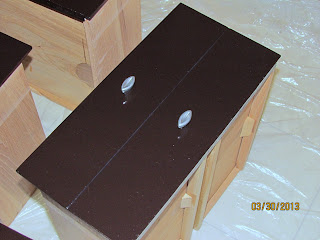 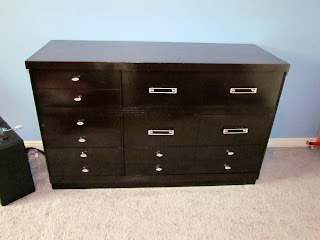 Ok....so all over the internet, I have been hearing about a product by General Mills called Java Gel Stain.  I have some kitchen cabinets in  a cabin that I want to do and so I was intrigued by this product so I got online and found out that a local store actually carries this it so off I went.  Now, not wanting to tackle such a huge project as a kitchen without knowing anything about how it would turn out, I got an old door and played with it.  Then one day I got this brilliant idea to try it on an OLD dresser that was actually my husbands Grandmother's that we were given 20 years ago.  I've hated this dresser for 20 years ..... I hated the color, the chips, the knobs, EVERYTHING so a long time ago, my husband bought me a new dresser but we kept this one around for storage.  Eventually when the kids arrived, it ended up in the nursery to hold all the baby items and it has just stayed there every since.  Afterall, it's not in my room.....and we all know how hard kids can be on things.....well, I decided that it was the perfect time to either help this dresser or pitch it to the trash and get a new one if I made it worse somehow!  So I decided to tackle it.  It really was a simple process and was faster than I expected.  The verdict is still out on whether or not I will do the kitchen cabinets because I want to see if this product "stays on" when abused by a 10 year old who never closes the drawers on his dresser.  If it holds up to him, it will easily hold up on the kitchen cabinets!  LOL.  I even kept the same hardware and spray painted it chrome but I can tell already that is only a temporary fix....just attachhing the knobs the color was coming off but for now, it looks 10 times better than it did!  Any one else ever tackle one of these projects?  I really liked the process, but if I were to do it over again, I would use a satin finish poly instead of semi-gloss.  I just happened to have semi-gloss on hand and didn't want to go out to buy anymore.  I only bought a quart of this stain and I'm sure I have enough to tackle that kitchen project if I decide to.  All in all, it's a nice pretty brown color and went on fairly easily.  The only concern I have with doing the kitchen cabinets, is that at the top of the dresser where the "grain" changes on the sides (you can see in the above picture), it left a little rough type finish I could never get just right.  I'm not sure anyone but me would notice and if I had used a sock instead of foam brushes, it might not be there at all, but......it is there if you look.  I'm also not sure this finish will "stay" on, but that's not because of the product....this dresser had almost like a thin layer of coated plywood paneling type finish that just wasn't your normal finish on a piece.  Because of that, I wonder if it will eventually rub off?  I was afraid to sand to much because it would take that fake finish down to an uneven wood/glued finish so.... I'll give it a couple months and see what happens.  That gives me time to see how it wears until summer.  I don't want to tackle a kitchen until  I can open doors and windows for ventilation.  Overall, I think this dresser looks better now than in the last 20 years I've owned it and my son LOVES it so we just need to finish the rest of his room now!