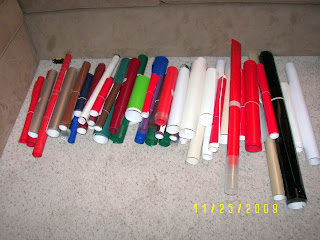 I am so excited. I've been wanting to try vinyl for a long time now, but the cost (9.99 for 4 feet) at my local scrapbook store scared me off. On the SCALHints forumn, one gal suggested that I contact a local sign company to see if they would sell me any scraps. When I called and told him I was looking for small scraps from 3 inches to probably around 12 inches, the man said he had a couple of boxes of scraps and to come in and take a peak. Well, his idea of scraps and mine were TOTALLY different. What he considered scraps is what I considered roll ends. I got 52 rolls most of them 15 inches wide in a variety of colors and some marked as long as 10 feet for a whopping total of $30.00. I was THRILLED! That's less than .60 a roll and some are as long as 10 feet but none less than 1 to 2 feet. Most are around 5 feet or so. I told my husband it was like Christmas morning and he just laughed trying to figure out why I was so excited about all this stuff and then promptly asked me if I intended to leave it in the middle of the floor! LOL....so anyway, do check with your local sign company. This one was awesome. I must admit though, that the first company I called said they would sell me vinyl but it would be 2 to 3 dollars a foot - even their scrap vinyl. I can buy it cheaper than that at my local scrapbook store. The guy I got this from says they always keep it to use, but they never do so he wanted to just get it out of there because for him most of it wasn't long enough (under 10 feet) for him to use. Woo hoo! Anyway, just wanted to share!