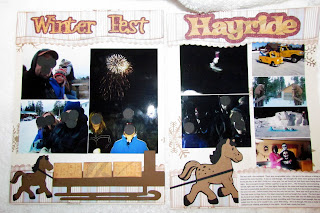 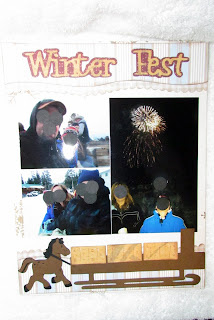 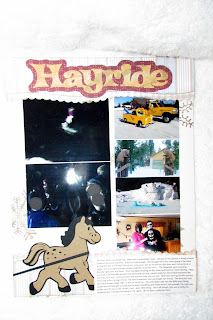 This was such a fun weekend.  We did nothing but play with the kids.  We took them to Winter Fest and enjoyed snowmobile races and stunts, vintage snowmobile races....many didn't finish....LOL..back then they weren't made to go that fast around and around.  Ha ha.  They had snow carvings and decorated snowmobiles...my favorite is this decorated snowmobile tow truck.  How cute is that.  We bought fun snowmobile masks for everyone but the best part of the whole weekend was the horse sleigh ride.  It was such a fun evening for a hayride.   My whole famlies favorite for the whole weekend was this ride....it was early evening....just starting to get dark and we rode for almost an hour for free as part of their weekend festivities.  It was wonderful.  The only down side was that behind the sleigh, was a little pony.  He had been trotting along behind that sleigh for so long that towards the end of the ride, he kept slipping and falling because he was so tired and to make matters worse, the rope had gotten pulled over his little eye and I'm sure that didn't feel great.  So as much fun as we had on the ride, we were glad when it was over so they could unhook the little guy and give him a rest.  You know...he had to take 2 to 3 steps for every step those big pulling horses took.  Bet he was glad when our ride was over too!